While townsfolk sing songs of adventurers prevailing over ancient evils and visiting rogues tell tales of hidden, distant treasures awaiting plunder, your mind always drifts to the immediate needs of the world around you that are going unmet. With a vision of a better future guiding you and a single gold coin willed to you from your dear departed Aunt, you go forth into the world to attempt a feat that would cause even the realm's bravest warriors to cower: start a charity!

How long can you keep your charity afloat when your donor has drifting interests? What will you compromise to keep meeting the needs across the realm?

In order to download this game you must purchase it at or above the minimum price of $1 USD. You will get access to the following files:

Added a A5 version of the RPG for download. Enjoy!

Obviously with one page to work with, there's not really any space to define "Mission Drift" as a concept itself. Mission Drift is a concept in organization where the purpose over time changes. This is typically seen as a bad thing. But Mission Drift can also be an evolution based on the discovered needs of your service population. Last time I went to the YMCA there were people of all ages, genders and denominations exercising, not just the young men training for seminary like their original mission stated. Here's a quick explainer of Mission Drift as a concept.

such a great premise…….

Thanks! I was always on the hunt for a fantasy type name, but at the end of the day, I thought it was best to call out the theme and just go for it. A "punnier" name briefly considered was: Donations & Dragons,.

Wow, it's nice to see people downloading the game. I'm an avid RPG player and am always looking to tweak my first game so feedback is definately welcome.  If you were an early downloader on day 1. I've posted small update to clarity a rule in the Grant Phase. We'll see if this creates conflict of peace in multi-player sessions. 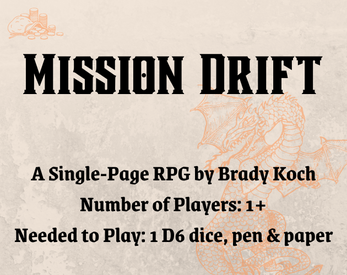